I don't think a big enough deal has been made about the Companion system in TOR, and what it means for group content. Now there is no excuse for pugging with people who perform poorly-- you can literally replace them with an NPC. In my mind this creates a benchmark for acceptable player performance, something WoW lacks.

I am extremely curious to see exactly how well these NPCs perform compared to an adept human player in terms of throughput numbers. I have to assume that even with perfect micromanagement, NPC performance will not be on par with a competent human player, though I may well be wrong. I've seen people mutibox dps and healing simultaneously before. Maybe this is designed as a high skill-cap to the PvE side of the game, allowing those with the aptitude to perform as well as two human players. Even if the performance isn't identical, I can easily envisage a hypothetical 10-man raid team having one or two of their players use companions to replace missing raiders, rather than gambling on unknown pugs.


I'm still playing WoW. Raiding is extremely fun, and I fully expect us to finally kill Deathwing this week.

When not raiding, I'm usually messing around with my auctions or mounts or transmog gear. Neeearly completed the Judgement recolour set from BC Heroics, which I think looks really pretty on Syrannia. [As a Warrior she so rarely gets to look pretty.]

A combination of factors has created impetus to level my cooking and fishing skill, and alerted me to the vague possibility of future acheivements in those areas. I actually ended up having a blast seeking out obscure recipes to bridge the gap between cooking skill level 250-300 such as Runn Tum Tuber Surprise from Dire Maul and Smoked Desert Dumplings from Silithus.

I picked up the Shadowmourne quest, because hey, it might happen eventually, and even if I don't complete it for a year or two, I don't think those quest rewards are going be much less leet than they are now.

I also can't help but notice how close I am to the The Exalted title, and I'm sure it's only a matter of time before I hit that milestone as well, what with all the old instances and raids I seem to be running these days.

I have one hundred and thirteen mounts. Last weekend I went to the trouble of actually making a list of the 40-odd "reasonably attainable" mounts I had left, from camp-fests like Aeonaxx and the Time-Lost drake, to the 1% drop-rate RNG-fests from the likes of Malygos and Attumen, to the various raiding Metas that were either before Syrannia's time or she just never got around to completing, to the thirteen Argent Tournament mounts I have yet to grind from dailies, to the three Flying Carpets that are only a short profession switcheroo away. I am certain there will be another "x number of mounts" achievement mount in Mists, the only question in my mind is whether the number will be 125 or 150. Or ideally, both. =D

Y'know, when you start thinking long-term like this, suddenly spending a night or two camping Aeonaxx doesn't seem like such a bad deal.


I would like to rant briefly about the Spine of Deathwing trinkets. There are a series of trinkets which proc a buff of 88 to a single primary stat which stacks ten times, giving basically 880 of that primary stat. This is, by a retardedly huge margin, the best itemisation a trinket could possibly have for every DPS spec of every class. 880 Intellect, 880 Agility, 880 Strength, and one for healers with 880 Spirit, plus a large chunk of static Intellect because Spirit is practically a secondary stat.

But for some reason the gear design team either hates tanks or have somehow not played a tank since BC, because for some jesus-fucking reason, this "single primary stat" design translated into giving tanks a trinket with the one stat they care least about, dodge rating. Dodge Rating. Not Stamina, which is, y'know actually a primary stat, not even Mastery rating which is about as desirable for tanks as any primary stat ever has been. They gave DPS and healers the absolutely most best ultimate itemisation ever ever and gave tanks DODGE FUCKING RATING. They didn't even give us any sympathy stats like they did the Healer trinket.

I made a rage comic about it. 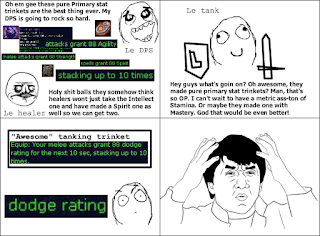 The levelling curve in TOR seems firmly modeled after WoW, and as such it seems to suffer from the same focus on solo questing. I have just completed the questing on Dromund Kass, including all the side quests, Heroic group quests and two Flashpoints I saw along the way [though I skipped the PvP]. I am now level 19, and am informed that my next story quest is in a zone labelled [explicitly within the game UI] with a level range of 16-20.

My first instinct as a WoW player is to skip that zone and get an early start on a higher level, presumably less overlevelled-faceroll one, maybe do a Flashpoint or two, but then it occurred to me that I'm on a storyline. Can I just skip this portion of the story and pick it up again in the next zone? [And is it too much to hope for a fully-voiced "Previously, on Star Wars"-style recap?] Are there multiple class questlines or just one? If it is just one, would not doing that zone totally derail my class quest line and make me unable to continue? Will I really need to skip all the additional content and side quests just to keep from out-levelling the story?

First-world problems, I suppose. It's probably too much to ask for a game to be offer challenging content by default. Any challenge needs to be bypassable, and the game tuned for people who cannot complete it.

On a related note, the significant other and I wiped two or three times on the first boss in Hammer Station before we conceded that we would need a dedicated healer. I wouldn't have it any other way. The more this game kills me the more I like it.
Posted by Coreus at 1:35 PM No comments:

Elite fucking quests. Blizzard didn't just stop making these for WoW, they went out of their way to take the existing ones out. TOR gave me two right in the starting zone for my class. I died! While questing! In the starting zone! The game developers respect me enough to not assume that if I find a quest I can't faceroll I will instantly stop having fun and quit the game!

I'm also really enjoying the solo RP aspect of the game. It's not something I really do unless prompted, but been given constant opportunities to better define my character through his responses to different situations is a very welcome addition to the experience. I had a half-thought to aim to be just [light-side], but of course in the harsh realities of imperfect situations many of the light-side options just seemed completely unreasonable. Sometimes bad people just deserve to die.

Companions seem like a really interesting idea. At this point I'm unsure whether I like them or not. On the surface, they seem to make the game easier, which is not something I'm interested in. On the other hand, having a companion gave me the ability to complete the aforementioned elite quests "solo", though one of them still got pretty hairy.

Giving every player a companion strikes me as a way to allow the game to be balanced for grouping [see above complaints about WoW's lack of challenging questing] without leaving solo players out in the cold. Did I read somewhere that the companions were only available when ungrouped? Because that would make a lot of design sense. If questing with a partner turns out to be four characters faceraping everything in sight then we're right back to WoW-style faceroll questing.

Though if that does turn out to be the case, maybe a five-man dungeon would be feasable...
Posted by Coreus at 2:20 PM 2 comments:

The significant other purchased this for me yesterday. Twelve hours of downloading later, I was able to play for roughly twenty minutes or so this morning before I had to leave for work.

Right out of the gate TOR has a distinct art style which strikes me as being deliberately designed [like WoW's] to age well, and a very responsive interface. The one thing that killed Rift for me was that the action bar interface was laggy as hell, so this was my number-one concern for this game. I'm relieved that this wont be an issue.

I had plenty of time yesterday to read up on the classes, and so far Jedi Knight seems a fairly good fit for my preferred playstyle, being basically a carbon copy of Warcraft's Warrior class.

This is a joke that will probably get very, very old in time, but right now I am just so terribly amused at how much of this game is lifted straight out of World of Warcraft.

I counted the following Warrior abilities which have [what appear to be based on the tooltip descriptions] mechanically identical equivalents on the new class:

You really can't count this stuff against the game though. WoW came to its design through nearly a decade of iteration, and I wouldn't expect TOR to stray too far from this design, at least at first.
Posted by Coreus at 9:45 AM No comments: